2 Biotech Stocks That Could Go Parabolic

Biotech stocks have taken a beating to start the year, with the S&P Biotech Industry Index down more than 49% so far. That doesn’t mean that investors should give up on the sector, however. These stocks are known for volatility because all it takes is one blockbuster drug to uplift a biotech company’s fortunes. With biotech shares down, this presents a good opportunity for long-term investors to find strong buys that could pay off handsomely in the long run.

There are several reasons a biotech stock could go parabolic — that is, have its shares see a sharp rise in a short period. The company could be the buyout target of a merger deal with a larger pharmaceutical company. Positive news regarding a trial on one of the company’s lead therapies could boost a stock’s shares, especially when the Food and Drug Administration (FDA) approves a drug. And even a surprisingly strong earnings report could send its shares jumping.

Axsome Therapeutics (AXSM 10.10%) and Clovis Oncology (CLVS 2.69%) are two biotech stocks that have the potential to go parabolic, even in a down market. 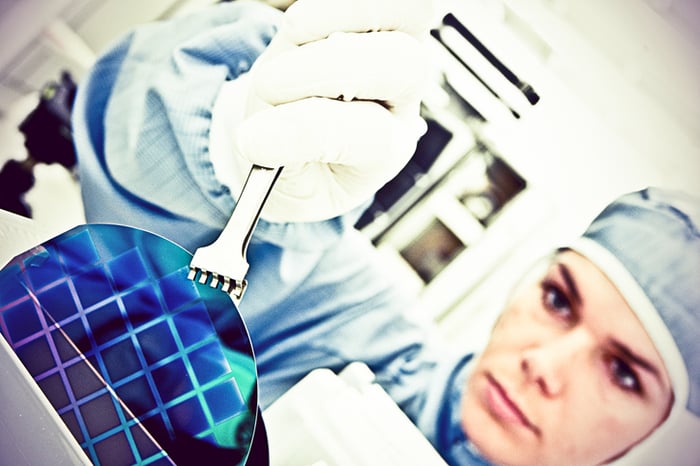 1. Axsome Therapeutics likely to be courted

Axsome Therapeutics, which specializes in therapies to treat central nervous system disorders, has seen its shares fall more than 26% this year. In its first-quarter earnings report, the company lost $39.6 million, or $1.03 in earnings per share (EPS), for the three months ending March 31, compared to a net loss of $29.3 million and an EPS loss of $0.78 in the first quarter of 2021. However, management believes Axsome has enough cash, $84.7 million, to fund activities only into 2024.

At the same time, Axsome is in the process of acquiring its first marketed drug, Sunosi, a therapy designed to improve wakefulness in adult patients with excessive daytime sleepiness due to narcolepsy or obstructive sleep apnea, developed by Jazz Pharmaceuticals. More importantly, the company has a blockbuster therapy with positive trials that could soon bear fruit. That makes Axsome one of the top acquisition targets among biotech companies.

The blockbuster therapy is AXS-05, a therapy used to treat major depressive disorder (MDD). The drug is an NMDA receptor antagonist, a class of drugs that are commonly used for anesthetics. The company expects approval of AXS-05 to treat MDD from the FDA as early as this quarter. That represents a large market as data from the National Institute of Mental Health shows that an estimated 21 million adults had at least one major depressive episode in 2020. On top of that, Axsome already sees more potential indications for AXS-05 to treat Alzheimer’s disease agitation and help with smoking cessation.

The company also has two other promising therapies in Phase 3 trials: AXS-12, used to treat narcolepsy, and AXS-14 to treat fibromyalgia. The first drug has been granted FDA Orphan Drug designation, and the company expects top-line results from its Phase 3 trial sometime in early 2023. Axsome plans to file a New Drug Application (NDA) with the FDA for AXS-14 in 2023.

Axsome would make a good takeover candidate because of the potential of its pipeline and since the stock has fallen so much a larger company could more easily buy it on the cheap. Even if a takeover didn’t happen, the stock could soon be sent soaring with an FDA approval for AXS-05.

Clovis Oncology is a biotech company that specializes in cancer treatments. Its shares are down more than 70% this year. Like Axsome, however, the company is a strong takeover candidate because it combines weak financials with a blockbuster drug and a promising pipeline.

Clovis just announced its first-quarter earnings on May 4. All of its revenue came from Rubraca (rucaparib), a drug approved for two very specific oncology uses. The first is as a monotherapy treatment for mutation-related advanced ovarian cancer patients who have been treated with two or more chemotherapies. The second is for metastatic prostate cancer patients whose prior therapies appear to be ineffective.

While sales of Rubraca are down, primarily because of fewer diagnoses of cancer during the pandemic, according to the company, that’s not the whole story. The drug is in several trials that would expand its label to make it a monotherapy for other cancers.

The FDA just asked Clovis for more clinical trial data regarding the drug, combined with Bristol Myers Squibb‘s Opdivo (nivolumab) as a first-line maintenance treatment for ovarian cancer patients who have undergone platinum-based chemotherapy. That’s likely to push back the company’s plans to submit a supplemental NDA for those indications, but the company also has Rubraca in two other Phase 3 trials to treat prostate cancer and sees potential for more indications.

If any of those indications pan out, the company’s financial picture changes noticeably, and the stock could rise, either on its own or when the company becomes an acquisition target.

I see both stocks as great long-term investments, especially given their current share prices. However, there’s a strong caveat as the companies are relatively limited with only one money-making therapy, and an FDA setback could push their shares even further downward. But, given the success their therapies have shown so far, they may be worth the risk for patient investors.

Of the two, Axsome may be the stronger candidate because it has a larger pipeline, plus, Sunosi brought in $57.9 million last year, up 104% year over year, and its patent doesn’t expire for 18 years. That extra revenue should help it fund its initiatives until AXS-05 gets FDA approval.