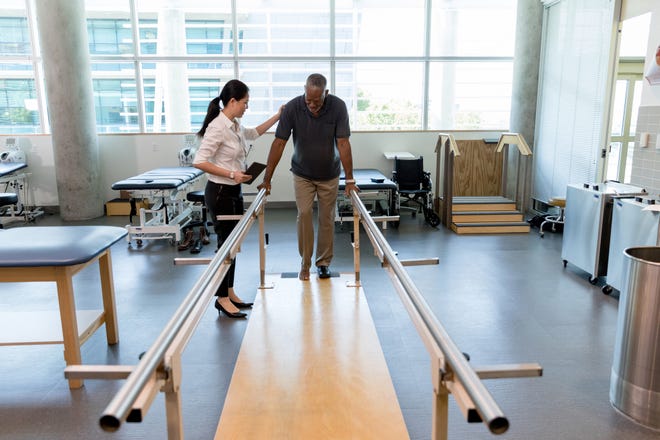 Throughout the month of May, the medical center is highlighting tests and care it provides to stroke patients, and educating Puebloans about the symptoms and causes of the leading cause of disability in the United States and a top cause of death.

Parkview also offers a support group for stroke survivors and their caregivers.

Parkview is using Stroke Awareness Month to spread awareness of the common symptoms of stroke — numbness and tingling in an arm, or stumbling over words, for instance.

Stroke symptoms often start small, but progress to more severe symptoms of paralysis or being unable to speak, swallow or see, the hospital said.

“The quicker you can identify someone is having a stroke, the better chance for a more favorable outcome for the stroke patient due to earlier therapy,” it said, noting that two million neurons die every minute during a stroke.

High blood pressure is a leading cause of stroke. Other common medical conditions that can increase the chances of having a stroke are high cholesterol, coronary artery disease, diabetes, obesity and sickle cell disease, the Centers for Disease Control and Prevention says on its website.

Studies have suggested that the number of strokes in the U.S. could more than double by 2050, as Americans live longer, an article published last year in the journal “Stroke” said.

The burden of stroke “in Hispanic/Latino individuals — the fastest growing ethnic group in the United States — is particularly elevated at younger ages, leading to early disability and substantial direct and indirect costs,” the article said.

The population of Pueblo is majority Hispanic, according to Data USA.

Recent studies have shown that lifestyle choices — including tobacco use, excessive alcohol consumption, eating too much salt or fat, and not getting enough exercise — increase the risk of having a stroke. Changing habits and adopting a healthier lifestyle can reduce the chances of suffering a stroke.

Stroke sufferers often lose the ability to do “the little things that make life worth living,” Maldonaldo said.

“Stroke steals a person’s ability to read a bedtime story to their grandchild, enjoy a meal with family and friends, or go for a walk in the beautiful spring weather,” she said.

“Stroke can steal the little things that we take for granted like being able to bathe independently, speak exactly what’s on our mind or drink a warm cup of coffee.”

Quick action offers the best chance for recovery, Parkview said, urging everyone to learn to learn the signs of a stroke and call 911 immediately if they recognize them in themselves or others.

Signs of a stroke

Parkview has listed stroke symptoms and the potentially life-saving final tip to produce the acronym BE FAST — a reminder that a speedy response is of the essence to ensure the best possible health outcome when someone might be having a stroke.

For more information on Parkview’s stroke care services, contact Tiffany Maldonaldo at 719-584-4047 or go to www.parkviewmc.com/care-treatment/brain/stroke-care/.