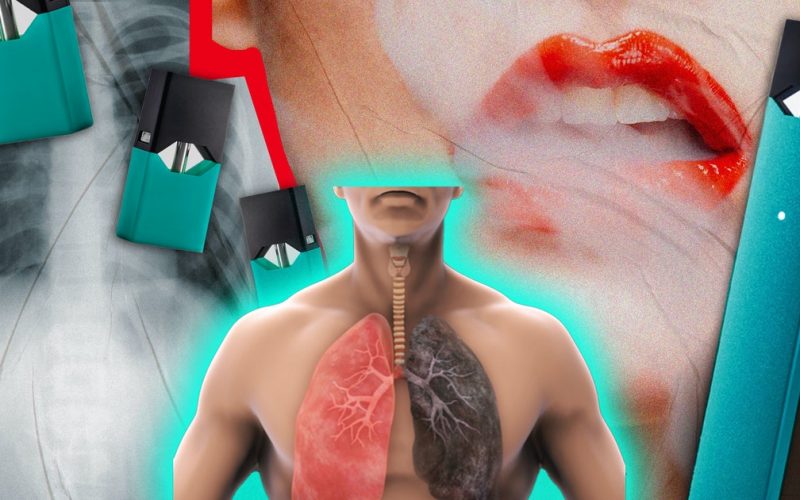 It can be hard to recall the news cycle Before Corona, but as summer gave way to fall in 2019, another public health problem dominated the headlines: the vaping crisis. At the time, the country was seeing a steep rise in hospitalizations for e-cigarette, or vaping, product use-associated lung injury (EVALI for short), mostly of young people, according to the Centers for Disease Control and Prevention. A staggering 2,807 hospitalizations or deaths were reported to the agency as of February 18, 2020, which peaked in September 2019. The CDC last updated its EVALI page on February 25, 2020, shortly before much of the U.S. declared a state of emergency due to the pandemic.

Since then, COVID-19, an infectious disease that’s killed millions and sickened many more around the world, and drastically altered life as we know it in the process, understandably took priority. But whatever happened to the vaping crisis? Did the pandemic merely distract us from it, or do people really vape less now?

According to the doctors Mic interviewed, the vaping crisis’s absence from today’s headlines doesn’t mean it vanished. Data suggests that a lot of people are still vaping. Even if we’ve seen a decline in the worst cases, chances are that vaping still inflicts some level of lung injury, even if it doesn’t land people in the ICU or kill them. And as in the case of cigarette smoking, it could very well lead to health problems decades later.

Because the pandemic has blurred all sense of time, a quick refresher on EVALI: EVALI refers to a lung disease related to vaping, whose symptoms the CDC says can include shortness of breath, chest pain, cough, vomiting, diarrhea, and fever. Last February, the agency stopped collecting state data on EVALI cases because of a significant decrease in cases and deaths since September 2019 and identification of an ingredient called vitamin E acetate as a primary cause (though there’s still not enough evidence to rule out other chemicals). It still monitors EVALI trends using emergency department data culled from a national, shared electronic health data platform.

Basically, “the CDC stopped tracking EVALI when they saw that the curve hit a peak and then it started dropping,” says Elisa Tong, a general internist at UC Davis Health with an interest in tobacco cessation. Plus, the pandemic hit not long afterward, a more urgent problem that demanded more resources. “I think the pandemic took over everybody’s minds and everybody’s data,” says Cedric “Jamie” Rutland, a board-certified pulmonary and critical care physician in southern California.

“COVID, just like EVALI, is a clinical entity that we’ve never dealt with before,” Tong explains, and it required all hands on deck to understand it. “It’s not that EVALI went away.”

Indeed, even if the CDC has stopped collecting EVALI hospitalization data from states, case reports suggest that the disease has persisted. Tong cites one that her UC Davis colleagues published in October 2020 of three teenagers with EVALI who tested negative for COVID-19, as well another published around a month later of 12 people in Utah with EVALI who also tested negative for COVID-19.

The overlap between EVALI and COVID-19 symptoms can complicate efforts to document EVALI cases, Tong adds. She explains that EVALI is a diagnosis of exclusion, meaning that doctors have to first rule out infectious causes — like COVID-19 or the flu — before they can diagnose someone with EVALI. Creating an added layer of complexity, the lung problems that EVALI triggers can also present with symptoms that aren’t specific to the disease, such as fatigue and diarrhea. “It’s not like you get a biomarker for EVALI,” Rutland tells Mic.

The stigma that surrounds vaping can also result in EVALI cases falling through the cracks. It’s not hard to imagine a doctor diagnosing a teen who shows EVALI symptoms but, say, doesn’t disclose their vape use, with pneumonia instead, Rutland explains. He also points out that the CDC documented only hospitalizations, not cases when people were admitted to the ER with a cough and/or other EVALI symptom and went home, for instance, which may have further underestimated the prevalence of the disease. “The problem is way bigger than what we talk about,” he says.

Tong agrees. What we’re seeing are the worst cases, she says, “whereas there are still a lot of people walking around probably with some component of lung injury. They just haven’t made it to the hospital or the ICU.” She mentions pulmonary colleagues who’ve noticed EVALI symptoms in otherwise healthy young people, but nothing serious enough to warrant hospitalization. “It may be a lot bigger phenomenon than we realize, especially when people are maybe turning to substances to help relieve their anxiety or boredom” during the pandemic.

There’s growing evidence that vaping and COVID-19 are very much connected.

And while the pandemic has rightfully attracted much of the spotlight, that doesn’t mean vaping is a separate issue. There’s growing evidence that vaping and COVID-19 are very much connected, Tong explains. She tells Mic of an online national survey conducted last May which found that 13- to 24-year-olds who had ever vaped but never smoked combustible cigarettes were five times more likely to report being diagnosed with COVID-19 — and seven times more likely if they had ever done both.

That said, another study found that that the 15- to 17-year-olds and 18- to 20-year-olds examined were 28% and 35% less likely, respectively, to vape during the pandemic (March to June 2020) than before it (January to March, 2020), respectively. It makes sense: During the pandemic, youth reported that they had less access to retail, not to mention peers with whom they could share vapes.

Digging a little deeper, though, reveals that there isn’t cause for celebration just yet. An analysis of data from a survey conducted from January 16 to March 16, 2020 found that 3.6 million middle and high school students reported vaping in the past 30 days, compared to 5.4 million in 2019. But 3.6 million youth is still a lot, and includes nearly one in five high schoolers.

While no one seems to have tracked these numbers since then, “anecdotally, knowing the kids I see, it’s still prevalent,” Rutland says. Likewise, Panagis Galiatsatos, director of the Johns Hopkins Tobacco Treatment Clinic, has seen “a considerable rise in patients” who are addicted to vapes and want to quit.

Also, even if vaping seems to have fallen among youth, vape sales appear to have risen during the pandemic. The CDC Foundation found that total sales of e-cigarette units, including prefilled cartridges, disposable devices, and e-liquid, rose by 15.5% nationwide from January 26 to October 4, 2020.

Basically, while future research still needs to tease apart the details, it’s clear that the vaping crisis is, as Galiatsatos puts it, “still raging.” He believes that now, though, the cause is shifting from the poorly regulated manufacturers and mom-and-pop shops that initially fueled the EVALI cases to “a much more insidious player”: bigger brands like Juul that have the bandwidth to establish standards to make their products “safer.” But he underscores that such standards won’t render vapes harmless — they’ll probably just prevent you from ending up in the ICU with EVALI.

“EVALI is a horrible thing, but that is not what scares me,” he says. “What scares me is the products that will parallel combustible cigarettes to get these kids hooked and then turn them into patients decades later.”

He foresees the FDA eventually stepping in and regulating vapes like they do combustible cigarettes, at which point, extreme cases of lung injury will more or less disappear. Instead, like cigarettes, FDA-regulated vapes would likely result in a constellation of diseases many years from now. Just as cigarette smoking caused cancers that wouldn’t have arisen otherwise, so, too, will vaping, Galiatsatos says, a grim future we can already extrapolate from chemical analyses and other lab-based studies. “Your lungs are not intended for these products,” he says.

The vaping crisis hasn’t gone anywhere, in other words. Vaping still causes lung injury, even if it doesn’t result in hospitalization, and will probably give rise to more sinister, slower-burning diseases that take decades to surface. The relative silence about them is just that — and the danger still lurks, undeterred.