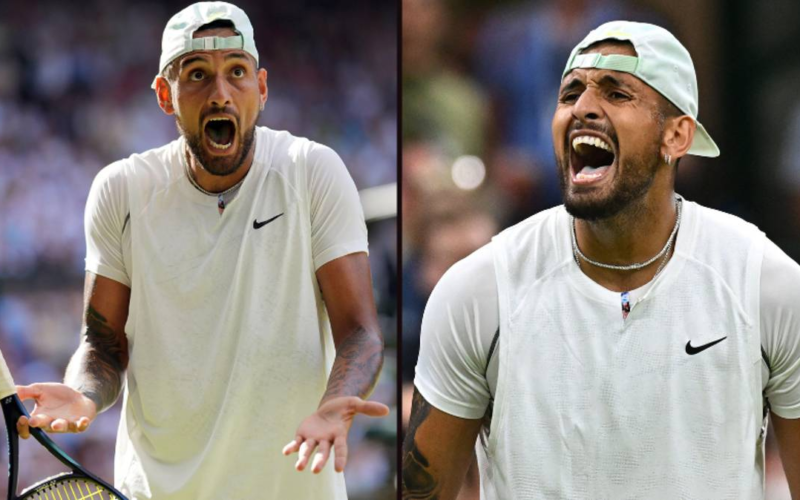 Aussie tennis bad boy Nick Kyrgios has lashed out at the crowd during a match… again.

Kyrgios was on the precipice of clinching himself a spot in the third round of the US Open in New York when he lost his cool over the crowd’s alleged antics.

Shortly after his match against World No. 50 Benjamin Bonzi took a sour turn, Kyrgios cracked it and turned to yell at the chair umpire to accuse some people in the crowd of smoking weed.

“It was f**king marijuana,” he said, as per news.com.au. “Obviously when athletes are running side to side and they have asthma, it’s probably not ideal.”

The chair umpire responded to Kyrgios’ complaint by making an announcement to the crowd.

“Ladies and gentlemen as a courtesy to the players please refrain yourselves from smoking around the court. Thank you,” the umpire said, as per Eurosport.

As the incident unfolded, Aussie commentator Todd Woodbridge said, as per news.com.au: “Nick has asked the umpire to remind the crowd about smoking saying he thinks he can smell someone smoking marijuana, never without drama are we?”

Kyrgios’ latest on-court outburst comes only a week after a fan revealed she plans to sue the tennis star after he accused her of having ‘700 drinks’ during a Wimbledon match.

The 27-year-old blasted the woman for allegedly putting him off his game and distracting him during points.

The spectator in question, Anna Palus, was escorted out of the arena before being allowed back in.

She has now vowed to take Kyrgios to court over his outburst, branding his allegations ‘reckless and entirely baseless’.

In a statement, the lawyer said: “On Sunday 10 July 2022 I attended the final of the Wimbledon tennis championships with my mother. It was an event we had been looking forward to for some time.

“During the course of the final, Nick Kyrgios made a reckless and entirely baseless allegation against me.

“Not only did this cause considerable harm on the day, resulting in my temporary removal from the arena, but Mr Kyrgios’s false allegation was broadcast to, and read by, millions around the world, causing me and my family very substantial damage and distress.”

“The need to obtain vindication, and to prevent repetition of the allegation, are the only reasons for taking legal action.”